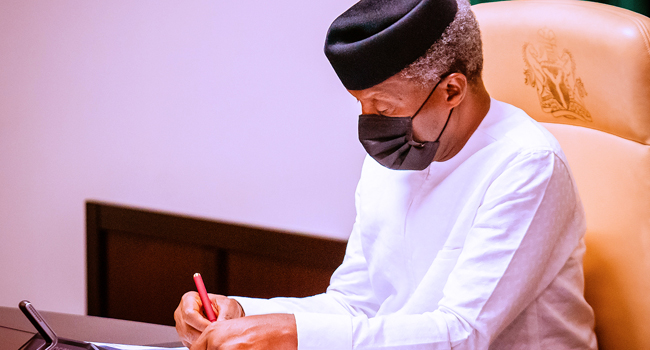 Legal provisions will be utilised to collect taxes on profits made locally by global technology and digital firms not based in Nigeria, but with significant economic presence in the country. Vice President Yemi Osinbajo stated this during an interaction with a delegation from the Chartered Institute of Taxation of Nigeria (CITN), led by its President, Mr Adesina Adedayo, at the Presidential Villa. To read more, click HERE

CONFUSION has trailed the emergence of Senator Andy Uba, as the candidate of the All Progressives Congress, for the November 6 Anambra State Governorship poll. Chairman of the APC primary election panel and Governor of Ogun State, Dapo Abiodun, while announcing the outcome of the party primary at Golden Tulip Hotel, Agulu Lake, Awka, early on Sunday announced Uba as winner. To read more, click HERE

The landing cost of Premium Motor Spirit being imported into Nigeria surged by more than 60 per cent between December 2020 and mid-June this year, although the pump price of the product remained unchanged, ’FEMI ASU reports. From an average of N143.60 per litre in December, the landing cost of petrol rose to N231.98 per litre on June 16 this year on the back of the rally in global oil prices and the depreciation of the naira against the dollar. To read more, click HERE

Audit is part of the cycle and chain of public finance management. It is not an optional process, but a mandatory process stipulated in the Constitution of the Federal Republic of Nigeria 1999 (as amended) – the grundnorm, being the highest in the hierarchy of the Nigerian law. The Constitution is supreme and if any law, policy, or practice is inconsistent with the constitution, the latter prevails and such a law, policy or practice will be void to the extent of its inconsistency with the constitution. This discourse reviews the impunity in the failure of some agencies of the Federal Government to submit to audit as demanded by the constitution, and the appropriateness of the response of the Auditor-General for the Federation (AuGF) and the Public Accounts Committee of the National Assembly to this development. To read more, click HERE

The Minister of Finance, Budget and National Planning, Mrs Zainab Ahmed, has urged the Nigeria Exchange Limited to aid ordinary citizens in participating actively in the capital market. According to a statement from the NGX, Ahmed, during a courtesy visit of the organisation’s management to the ministry, urged the company’s management to leverage technology and innovations that would ease the process of trading on the exchange and increase citizen participation. To read more, click HERE

The Nigeria Deposit Insurance Corporation has disclosed plans to commence the payment of liquidation dividends to depositors of the 14 failed banks whose licenses were revoked by the Central Bank of Nigeria. The corporation confirmed this on Sunday in a statement titled ‘NDIC commences payment of liquidation dividends to depositors, other stakeholders in 14 closed banks’ issued by the Director, Communication and Public Affairs Department, Bashir Nuhu. To read more, click HERE

The Nigerian Maritime Administration and Safety Agency has disclosed that it had so far shortlisted 11 companies to benefit from the Cabotage Vessel Financing Fund. It also said that it was seeking approval from the Federal Government for to cancel duties for new Nigerian flagged ships. To read more, click HERE

The Securities and Exchange Commission (SEC) has said that the Non Interest Capital Market has so much potential in Nigeria, adding that it has the potential of attracting a large pool of untapped investor base who have apathy to conventional instruments, to participate in capital market as well as the existing investors who seek to… To read more, click HERE

Fund managers across the country are taking advantage of the rising demand for dollar-based investments to sell dollar-based mutual funds targeted at retail investors. A survey of some of the major fund managers in the county reveals a significant rise in the number of mutual funds based on investments in the US dollars with a promise to return an average of 5% per annum. To read more, click HERE